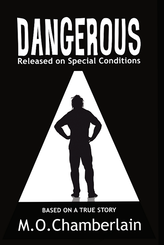 About this book
Dangerous
Based on a true story, Zac Sullivan, a violent offender, feared within maximum security prisons, finds a reason to change and gains an early release to the far north, where his grandmother is dying and his grandfather is looking for a second chance.

This is the story of a friendship between a man and his grandfather. It is a simple tale of the legacy of alcohol abuse across the generations and two men forming a bond that is ultimately tested by unexpected death. Set against the harsh world of the New Zealand prison system and the hardened cynicism and prejudice of a rural community tired of offending, Dangerous traces the emergence of something new.
​
Chamberlain has created another page turner. He deals sensitively and refreshingly with the age old complexities of alcoholism and criminal offending, as well as the modern curse of cancer.
.
BUY NOW

“A really good read. There are enough turns to keep the reader guessing, but nothing that
stretches one's credulity.The dialogue crackles along, and the pace of the action is nicely done.”
- Matt Turner, former editor, Penguin books