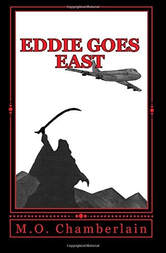 Eddie Goes East
Eddie Goes East is the story of a boy who leaves his own country of New Zealand to accompany his father when his father’s company sends him to Arabia. The book is the second in a trilogy about the adventures of Eddie Tompkins and his friends. This time Eddie’s madcap adventures really test the loyalty of Michael and Cain as he struggles to survive the harsh conditions of the Arabian desert, learns how to ride horses with the Bedouin, tries to free a new friend from prison and gets caught up in a terrorist attack on his compound.
.
BUY NOW

“This book is adventurous, gripping and thrilling. Based on a true story, it’s the kind of book that keeps you wanting to read until the last page. In May 2004 when terrorists attacked compounds in Saudi Arabia thousands of expatriates fled the country never to return. The author has drawn his material from the accounts of two New Zealand families who refused to leave and stayed to rebuild their lives.
- Vargie Johnson Author of Historical Fiction.

“I’ve already finished your book, could not put it down after I started it. It was awesome.”
- Melva Sumner, USA